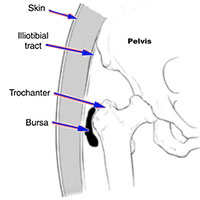 A bursa is a closed, fluid-filled sac whose functions it is to cushion and provide a gliding surface to reduce friction between tissues of the body around joints. The major bursae (bursae is plural for bursa) are located adjacent to tendons near large joints, such as in the shoulders, elbows, hips, and knees, though there are hundreds of them throughout the body. When the bursa becomes inflamed, the condition is known as bursitis.

Specific to the hip is trochanteric bursitis (also known as greater trochanteric pain syndrome or GTPS), which refers to the bursa by the side of the femur. This shock-absorbing sac can become irritated and swollen for unknown reasons or as a symptom of other issues such as gluteal tendon partial tears, arthritis or labral tears in the hip, uneven leg lengths or Iliotibial Band Syndrome from repetitive overuse.

Once the bursa becomes irritated and inflamed, recovery time can be a surprisingly long process requiring a change in activity for a half year or longer to allow the bursa to heal. Steps can be taken to prevent bursitis by strengthening the core and hips through a moderate training program. Orthotic inserts for people with flat feet may also help.

The main symptom of hip bursitis is pain at the point of the hip. The pain usually begins over the outside thigh area. In the early stages, the pain is usually described as sharp and intense. Later, it may feel more achy and spread out.

Typically, the pain is worse at night, when lying on the affected hip, and when getting up from a chair after being seated for a while. It also may get worse with prolonged walking, stair climbing, or squatting. Some patients experience buttock pain that spreads down the outside of the thigh to the knee area and into the back of the leg. Pain may be severe enough at night that it disturbs your sleep. Most patients will describe tenderness when they press on the affected area or lie on the affected side. There may even be a limp in severe cases. Rarely, there is redness and warmth over the area (from inflammation or infection).

Hip bursitis can affect anyone, but is more common in women and middle-aged or elderly people. It is less common in younger people and in men. There are some risk factors that are known to predispose you to the development of hip bursitis and they include:

Your doctor may begin the diagnosis by asking you to stand on one leg and then the other, while observing the effect on the position of the hips. Feeling the hip and leg may reveal the location of the pain, and range-of-motion tests can help to identify the source. Radiographs (x-rays), ultrasound and MRI may reveal a tear of the muscle below the bursa as well as evidence of inflammation or swelling in the area. Below, the arrow on the left image is pointing to the normal bursa. The arrow on the image to the right is pointing to the area of fluid where the bursa is inflamed.

The first line of treatment is what is termed relative rest and does not involve surgery. Many people with hip bursitis can experience relief with simple lifestyle changes This does not mean bed rest, but simply avoiding those activities that aggravate the situation and increase pain around the area. Icing the area may also be of some benefit for temporary relief of the irritation. A non-steroidal anti-inflammatory medicine, such as ibuprofen, may relieve pain and reduce the inflammation. If these are ineffective, the next line of treatment is a steroid (cortisone) injection using ultrasound guidance into the inflamed area. This is a simple and effective treatment that can be done in the doctor’s office. It involves a single injection into the bursa and typically provides permanent relief. If pain and inflammation return, another injection or two, given a few months apart, may be of some benefit. Physical therapy to strengthen the hip muscles and stretch the iliotibial band can also relieve tension in the hip and reduce friction.

Surgery is rarely needed for hip bursitis. In cases, where the pain does not improve after physical therapy and injections, the inflamed bursa can be removed surgically. Removal of the bursa does not hurt the hip, and the hip can actually function normally without it.

As with many other areas around the body, a newer technique that is gaining popularity is arthroscopic removal of the bursa. In this technique, the bursa is removed through a small (1/4-inch) incision over the hip. A tiny camera, or arthroscope, is placed in a second incision so the doctor can guide the surgical instruments and cut out the bursa. This surgery is much less invasive, and recovery is quicker and less painful. Early studies have shown that arthroscopic removal of the bursa is very effective, but this is still currently being studied. The procedure is known as a trochanteric bursectomy. This is typically an outpatient procedure that allows for a quick recovery. Most patients will use crutches for a few days and progress rather quickly over about ten days to two weeks.

At the time of bursal surgery, a very close examination of the gluteal tendons will sometimes reveal subtle and sometimes very obvious degeneration and detachment of the gluteal tendons. If this detachment is not repaired, removal of the bursa alone will make little or no difference to the symptoms. If there is a tear, (most commonly this is the gluteus medius muscle, which is one of the butt muscles), the abductor may also be repaired through the arthroscope.

In some cases, there is a need for a larger repair that may require hospitalization. In situations where a repair is performed, you may require crutches for several weeks (up to six weeks), in order to protect the repair of the tendon.

Following surgery, a short rehabilitation period can be expected. Typically, patients will visit a physical therapist about twice per week for four to six weeks. Most patients find that using a cane or crutches for a couple of days is helpful. Most of the soreness from surgery usually goes away after a few days. In most cases of a simple bursectomy, patients return to all of their activities by about six weeks. In cases where a repair of the tendon is performed, the return to all activities is delayed until at least three months following the procedure, when you may be allowed to begin higher impact activities.  Realistically, the recovery will take at least six months to be back to all activities.